The Trastevere neighbourhood, where we are now, isn’t far from the Aventine Hill, one of the seven, and one on which a church was built in the early 5th century. It was eventually dedicated to St Sabina and the Basilica of Santa Sabina is now the mother church of the Dominican Order. It was in the convent attached to the church that Thomas Aquinas lived and worked for a while.

So we wandered up to the Aventine this morning and took a few snaps in the area. This is the Basilica with the convent in the background–taken from a nice little garden next door, the Giardino degli Aranci (Garden of Oranges).

Here are the orange trees and the umbrella pines. 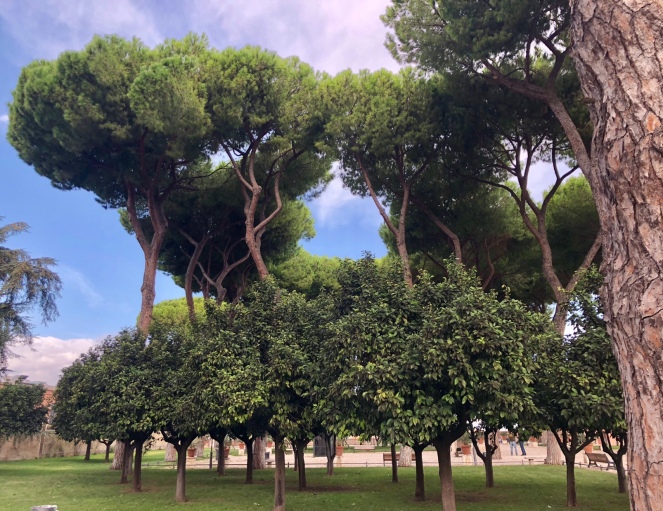 The residential area around the Basilica is very pleasant, the trees and shrubs are still blooming and there are some nice apartment buildings with fancy entrances.

We took the shorter route down the hill …

… and went back to the Jewish ghetto for a lunch of artichokes, in both Jewish and Roman style, and rice balls. 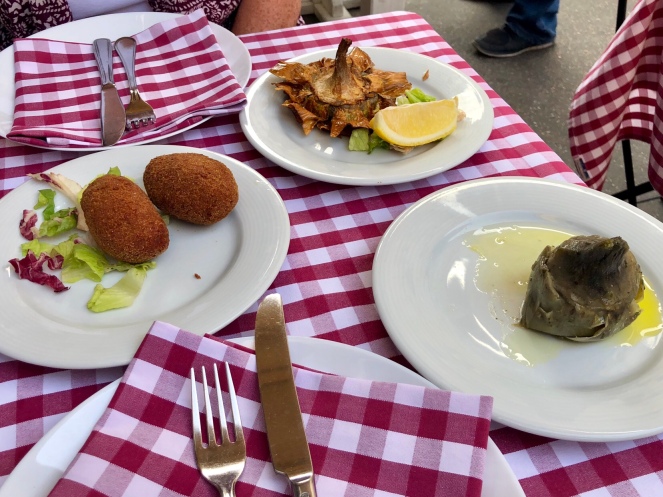 Behind us as we ate, one of the chefs was making pasta.

So that’s it. We set off for the airport at 7:30 tomorrow morning and if the flights and bus back to Ottawa are on time, we’ll be home about eighteen hours later. We’re looking forward to being back in Canada in time for Thanksgiving and the autumn colours.

We said goodbye to Assisi late this morning and caught the regional train up to Rome–a much less hectic journey than Friday’s from Florence. There weren’t many tunnels on the slow route to Rome although some parts were very hilly, almost mountainous. We passed the two and a half hour trip watching some beautiful countryside go by, olive groves, hilltop towns–the usual for this part of the world.

For our last two nights we’re booked in to a B&B on the Via Garibaldi in the Trastevere neighbourhood. It’s a nice little oasis with a gated courtyard away from the traffic, pedestrian and otherwise.

After a couple of hours exploring the area, we’re back in the B&B and beginning to think about where to go for dinner.

No pictures today. It rained heavily in Rome an hour or so before we arrived, and it’s threatening to do so again. We’ll get a couple of photos of the B&B tomorrow.

This morning we took the tickets we bought a couple of months ago and skipped the queues to tour the Sistine Chapel and St Peter’s Basilica. But we’ll never do that again.

The paintings, frescos, the architecture, the sculptures and the interior of the basilica are magnificent. And I was particularly impressed by the School of Athens, maybe because it’s among the few artworks I can recognize, but the experience of the chapel itself was spoilt by the crowds, the discourtesy, and the continuous pushing and shoving. We were glad to leave. Looks like the Swiss Guardsman below was glad to see the back of us too.

After some excellent bruschetta for lunch–we had two kinds, one was the usual tomato and the other was black olive and garlic very finely chopped–we were back down in ancient Rome for a tour of the Colosseum, or, as we now know it’s proper name, the Theatre of Flavian. It’s a busy tourist spot too, but not as bad as the Vatican. 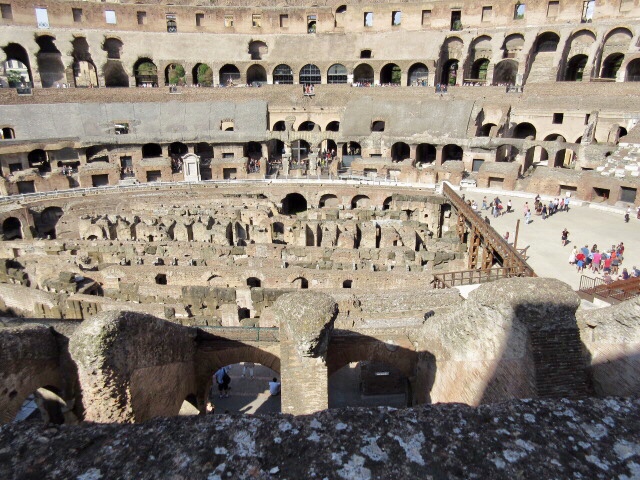 Tomorrow is our last full day in Rome before taking the train north to Bologna and we’re joining a walking tour of the old Jewish ghetto soon after breakfast. Letitia is looking up kosher bakeries as I’m writing this post for after the three-hour walk :-).

Heading out soon into the warm Roman evening to find some dinner.

We saw the acronym SPQR all over Rome today, and not in it’s historical context. It seems that the phrase, the ‘Senate and People of Rome’ is still the motto of the city and is displayed on city property from railings to manhole covers. 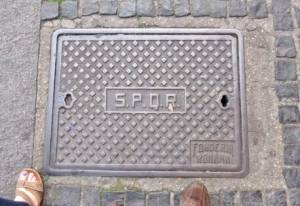 The hop-on-hop-off bus proved to be a good way to orient ourselves to the city. We picked it up on the south side of the Ponte St Angelo across from the Castel St Angelo, both built in the first century AD.

And one of the genuine modern experiences we can now claim as our own, at least from the perspective of spectators, is that of Roman traffic chaos–it has to be seen to be believed. Having survived the bus ride as far as the Colosseum, we hopped off and headed away from our fellow tourists into the back streets of the neighbours a little to the north.

Not too far away we found what we were looking for, the Basilica of St Clement, the second or third Bishop of Rome, depending on whether you regard Peter as the first.

The present building is from the twelfth century; it replaced a 4th century basilica, which in turn replaced a first century church, which had appropriated and expanded a building dedicated to Mithras–and we explored all of these today, one under the other. Quite amazing.

Almost everywhere we look in the old centre of Rome, we’re seeing what people before us have seen for the last two thousand years or more.

Tomorrow morning, St Peter’s and the Sistine Chapel and then a closer look at the Colosseum.

And just to show that we’re really in Rome, here’s Trish resting for a minute as we strolled along the Tiber this afternoon.

After nearly nine hours on our feet, I’m glad the ancient Romans didn’t have cars, otherwise we’d have had farther to walk between the sites and the sights today.

This was our first time flying with KLM. Our flights were free of the usual frustrations of flying, and we arrived in Rome on schedule. Although we’re tired, we did an hour or so’s recce of the immediate area around our hotel and now it’s time for a rest.

This is the view from our third story room: 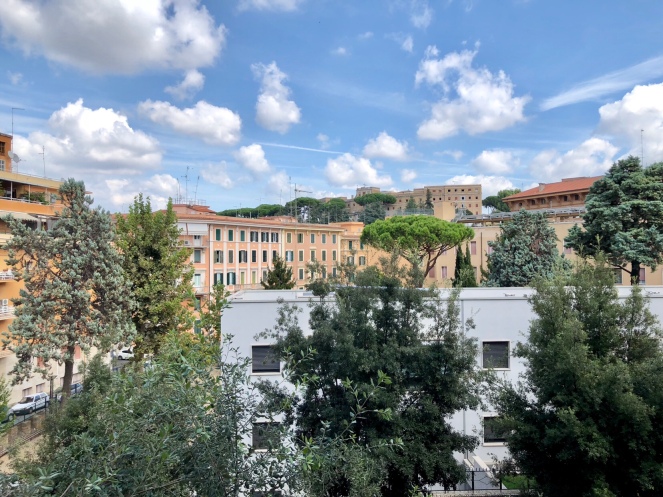 We’ll be rubbing shoulders with the Pope for a few days; we’ll, we’ll be neighbours at least– looking north from the balcony, which looks almost due east.

These are photos of the foothills of the Alps taken on the way to Rome this morning. 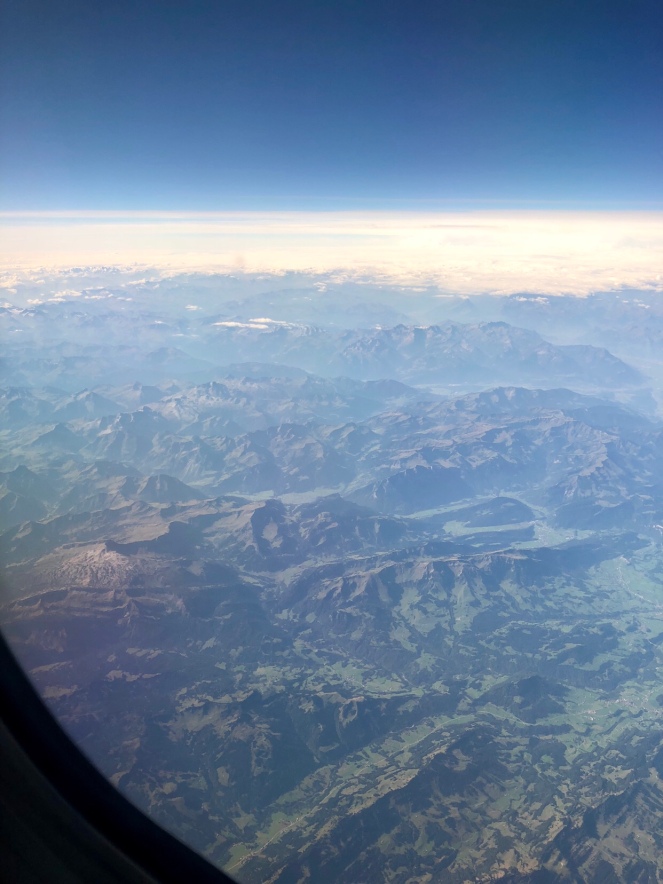 It was a lovely sunny morning and we had a perfect vantage point humming along at 33,000 feet or so.

Full marks if you can spot the object I was trying to photograph in the next image–the skies of Europe are like Piccadilly Circus!